HOW GOD SEES YOU 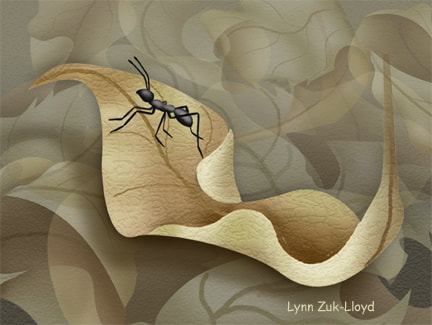 The enemy wants you to see yourself as tiny, helpless and all alone in a dry, unfruitful land that’s full of giants. But I, the Lord your God, say: Look up! Look towards ME, Jesus Christ. Agree with My Word about who I AM, who you are in ME, and how I see you.
You are never alone! You are not powerless. I did not create you to be stepped on, but to develop and release the gifts and talents I gave you. As you yield yourself to ME, so shall you slay giants.
I created you to overcome all the power of the enemy that comes against you. I created you for sweet fellowship with ME. And together, we will advance the Kingdom of God. For the message of the gospel is not based on man’s wisdom, but on God’s POWER!

“Ant on a Leaf” is an excerpt from Into His Presence: Snuggling Closer to Jesus Christ through Prophetic Art and Writing by Lynn Zuk-Lloyd. Her book is available on Amazon.com. 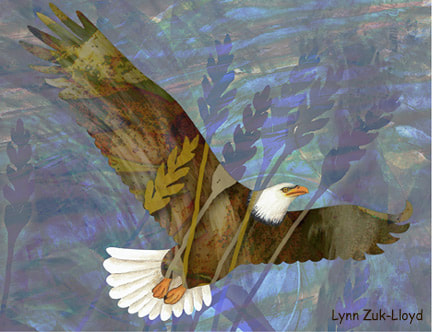 Soar, My little eagle, soar! You are not grounded! You were created to fly high – to use your gifts and talents, and overcome all obstacles. Exercise your wings! Do not be afraid to flap your feathers. Look up! Where your eyes are focused, the rest of you will follow. Keep your eyes fixed on Me, Jesus Christ. I AM leading you higher and farther and deeper and wider. Let us step forth together – God and His child – you and Me. I AM opening your heart to “see” as you use your talents and walk with ME, Jesus.

“Eagle Soaring” is on Fine Art America, where Lynn's art can be purchased as prints, greeting cards, on tote bags, cups, T-shirts, puzzles, throw pillows and much more! 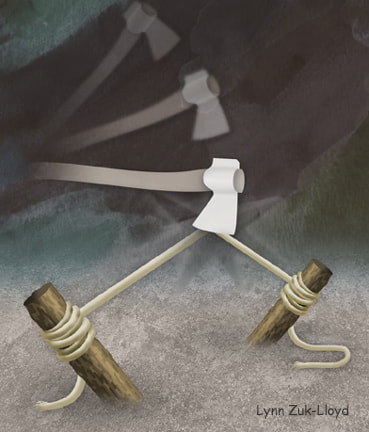 Thank you, Lord Jesus Christ, that I can ask You for anything. I need courage. Please cut the cords that keep me tied to my old ways. Take an axe to them. Chop them off. Sever the ropes completely. Untangle me from the vines of fear, distraction, temptation, busyness and laziness. Break every bondage, every chain, every prison, every lie and every curse that keeps me from moving forward and being fully alive in You, Jesus Christ.
I’m tired of being an onlooker. I have stood on the outskirts and watched. I evaluated, analyzed and didn’t enter in. I even criticized those who stepped out. Forgive me. I’m hesitant, fearful, and unsure. I feel unqualified, inadequate and not good enough. I don’t want to be this way anymore. Scripture says that You have qualified me and that nothing is impossible for You. My focus needs to be not what I can’t do, but on what You can and are doing. I’ve been an observer long enough. I want to be an active participant in life and in your Kingdom.
Remove from me the fear of what others think. Stamp out the thoughts in my head that say I will look stupid. Wipe away the anxiousness that keeps me from using my creative skills. I release my gifts and talents to You, Lord Jesus. Give me courage to sharpen my skills, use my gifts, and not let fear stop me, because stepping out despite being afraid is how I will overcome the enemy.

This prayer contains excerpts from “Awaken Me! Crying Out for More of the Lord.” It’s a book of praise and prayers for those hungering for more of Jesus Christ and desiring to walk in His ways. This book is available as an E-book or paperback on Amazon.com.

OVERCOME MOUNTAINS THAT STAND IN THE WAY 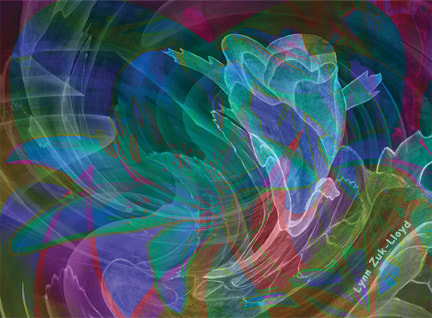 Huge waves heaved upward, like mountains rising from the sea. When they reached their pinnacle, they plunged downward with such a powerful force, a bowl-shaped crater formed in the ocean. Even though Franklin knew this was a dream, he trembled. He remembered from his days of sailing, that the turbulent, ever-moving seas could create a carpet of instability at any moment. The dream continued. Giant mountains rose up in the distance. Their immenseness overwhelmed Franklin.
Before fear could overtake him, wisdom entered Franklin’s heart: “Neither the waves nor the mountains are obstacles to God. What looks like a mountain to you is a mole hill to the Lord.”
Then a question entered Franklin’s mind. “What does Christ see?”
Before he could think of something to say, the answer appeared in his thoughts. “Jesus Christ sees His people and His church walking in victory. He sees the dormant awakening, the dead coming to life, the shy becoming courageous, and the meek boldly taking the lead. He sees His followers overcoming everything in their path, and righteous stepping forth, the unsaved being saved, and the joy of salvation celebrated every day.”
“Wow!” Franklin said.
“Focus not on what you see, Franklin. Focus on what Christ sees,” the Holy Spirit instructed. “Then you will be able to think eternal thoughts and do eternal things. For the Lord God Almighty has given His people the mind of Christ. Nothing can overpower you when your eyes are on Jesus. Don’t look at the waves. Either ride them as an adventure, or tell them to ‘Be still.’ As for the mountains, they are figments of fear, magnified by your vivid imagination. Look beyond the mountains and see the Lord. And as you look at Jesus, the mountains will crumble and the waves will cease.”

The above story and illustration are excerpts from "The Garden of God’s Promises" available on Amazon.com as both an E-book and paperback.

It is the Lord who opens the doors as we step forth in our calling! When Lynn Zuk-Lloyd desired to paint live at Christian conferences and worship services, it was the Lord God who impressed upon her the importance of speaking up, letting people know that she was a prophetic artist, and asking if she could paint. When she found people and places that said "Yes," she was thrilled! This opened another door to a deeper walk with Jesus Christ as she sought His direction on what to paint, how HE wanted the image painted, and then the excitement of watching the painting come to life! And Jesus Christ wants to do the same for you – to bring to life the deep artistic desires HE placed on your heart!